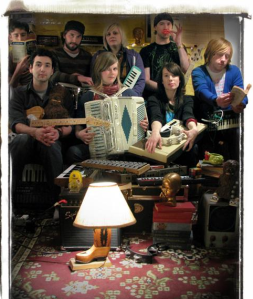 Yet another insanely successful all-ages show was observed on Sunday, due mostly to the fact that Michou and Stefan (Efan) played, but also because Amos The Transparent (Ottawa) had their OWN following. This is pretty impressive because it was their first show in Windsor. I knew who they were before they booked the show with Michou, as I had heard their name on CBC Radio 3 a few times. The day show was crisp, tight, and apparently a hit with the packed house of under-agers. It seemed like the Ottawa visitors sold a nice chuck of merch, which is always satisfying for a booker like me.

Also, to make note of a SUPER development…Amos The Transparent PLAYED HIPSTER HOCKEY with us. Not me, as I went home to shower for the day-show…but everyone else who stayed to play. Awesome.

In the evening, it seemed like all hell had broken loose. We were all unaware of who would go when, and whose set was happening where. Library Voices from Regina showed up in order to fulfill the set they planned with me, as an add-on, to Michou‘s night-show (a mirror of the day-show). They are a band ten members strong. We hoped they needn’t load in all of their gear, if they could do some borrowing. But the bands were out, gallivanting…and enjoying the city. We weren’t sure we could borrow their amps and such, which made for some hasty decisions, but Amos The Transparent was SUPER COOL in not caring about the lending of their gear (not instruments) to Library Voices.

To say the least, I was blown to shreds as the hobbled eight-piece Library Voices took the stage (and floor) and unloaded. It might as well have been The New Pornographers for crying out loud. The sound was prime! By the way, Ryan Drabble, from Slow Down, Molasses was responsible for traversing that mystical double-soundboard action. He was a stellar guy to boot…but he made them sound as good as anyone could have under that roof. AND HE WAS RUSHED!

The best part was that, as I knew I’d be leaving, likely before their set, they hurried and got set up in time for me to hear two songs. Rino, from Black Kettle Bistro, and I were in awe. This was the opening band for the night show! I knew they were good, but THIS?! Brilliant.

I hope all these bands decide to come back…really…
For those of you who want to see the live stream for this afternoon show, here it is.
http://www.ustream.tv/flash/video/1257361Live TV by Ustream