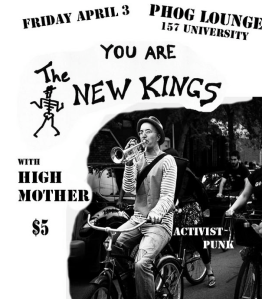 The New Kings (Toronto) are playing with High Mother this Friday. If you don’t recall The New Kings, it’s because it’s been a while since they were here. They used to open for Kelly and The Kellygirls whenever they came to Windsor. The New Kings have a punk/rock approach, with a large dose of ACTIVISM.

Michael Louis Johnson is an outspoken bike activist, among other things, and has hosted several public events in support of his views in Kensington Market and other parts of Toronto.
Links are HERE, HERE, and HERE.

No kidding…with TOTAL COINCIDENCE, and film is being shown next door at The Capitol Theatre called, Rubber Side Down: From The Rockies To The Rock, showing at 7:30pm.
From their website: “It is an epic Canadian adventure best summed up in three words: Coast. To. Coast. Spanning over three months in the summer of 2008, two amateur cyclists would attempt to pedal 8000 km from Victoria, BC to St.John’s, Newfoundland, in an effort to shed light on Crohn’s Disease and ulcerative colitis—tragic bowel diseases that are in dire need of a voice. What they discovered will astound you.”

High Mother compliments this show perfectly, with high energy, straight-up rock and roll power. This local band, on the newer side of fresh, blew me away when they played our place for last year’s FAM Festival. If you like it loud or “with a message”, be at Phog Friday night.

You are SO lucky.
Slow Down, Molasses (Saskatoon)are coming with none other than Valery Gore (Toronto) on Saturday night. Unreal.
Who is Slow Down, Molasses? Well…remember Library Voices, who I blogged about, and who blew our minds? Well, Ryan, the brilliant sound-man and great guy is returning with HIS band.
What do they sound like?
From the Slow Down Molasses myspace:

“Slow Down, Molasses are like the Broken Social Scene of the prairies, and their music, both individually and as a group, always tastes good no matter how you mix it.” – Exclaim!

“…I hear Cuff the Duke and the band Low getting busy with each other on their new album, I’m an Old Believer.” – Chris Alscher – CBC Radio 3 “…channelling the spirits of Neil Young, Bonnie “Prince” Billy and Low” – FFWD Weekly “…a gloriously ramshackle amalgam of Okkervil River and all things Will Oldham” – Blog Cabin “I’m an Old Believer is unique, adventurous and incredibly enjoyable. Somehow – like the emerging scene from which they come – the collective manages to smash down your preconceptions but satisfy your expectations with a blend of surprising warmth and cold isolation. Hyperbole aside, and knowing my tastes don’t often line up with the norm, this record is a must have.” – herohill.com

And now onto the opener! Valery Gore! Ba-BOOM!

You may remember her from her poster the first time she came around.

She played with Royal Wood on a Sunday night almost 4 years ago. Now, Valery has a new album out, and she is a BEAST! Her single Worried Head is easily one of the best songs I’ve heard this year. Check it on her myspace page…

This show is going to turn heads. Don’t say I didn’t warn you. They didn’t book this thing together…I sorta lucked into these two on the same night, so get there and enjoy this rarity.

And lastly on Sunday. Holy shit, if I may say so myself.
Brasstronaut (Vancouver) who blew our minds at the end of 2008 are BACK! Edo has convinced his boys to head back to Windsor, with their horn and piano infused awesomeness. Here’s a video –
http://vimeo.com/moogaloop.swf?clip_id=2741422&server=vimeo.com&show_title=1&show_byline=1&show_portrait=0&color=&fullscreen=1
Brasstronaut – Requiem for a Scene from Alan Miller on Vimeo.

And that’s not all. 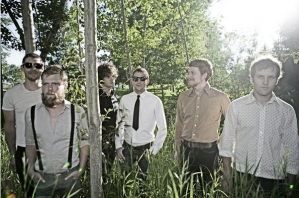 The Whitsundays from Edmonton are coming too!
Ever heard of Shout Out Out Out Out? The Whitsundays are a band containing members from that other Edmonton music-monster, but with a MUCH different sound.
What do they sound like?
From The Whitsundays’ myspace page:
“It could just as easily be 1967. But no matter the year, Edmonton, Alberta’s the Whitsundays certainly have a knack for writing yellowed, reverb-wrapped pop music, borrowing from the grand tradition of English psychedelia, garage, and vintage organ rock. With reverent nods to the flower-picking whimsy of the Zombies, the red-faced bluster of the Animals, and the delightful inanity of Syd Barrett, the Whitsundays’ self-titled debut is a vintage gem, and a charming hodgepodge of ’60s musical ephemera. The main Whit, Paul Arnusch — who also logs time with starry post-rock supernauts Faunts — called on his ever-expanding collection of vintage gear (from archaic guitars to Rhodes and Wurlitzers) to document a loose, passionate love letter to the past 40 years of “timeless music.”

Jamie Greer managed to get this newer, up-and-here band onto this bill. We’ll all thank him later. I will be at this show, on a Sunday night, and I highly advise you get your ass to this one as well.

And without any other item needed to draw me to this show, we overdo it and add A Welcome Breeze. I cannot think of a better opener for Brasstronaut, as he did such an awesome job when he opened for the first show. Be there. Be happy you were there.