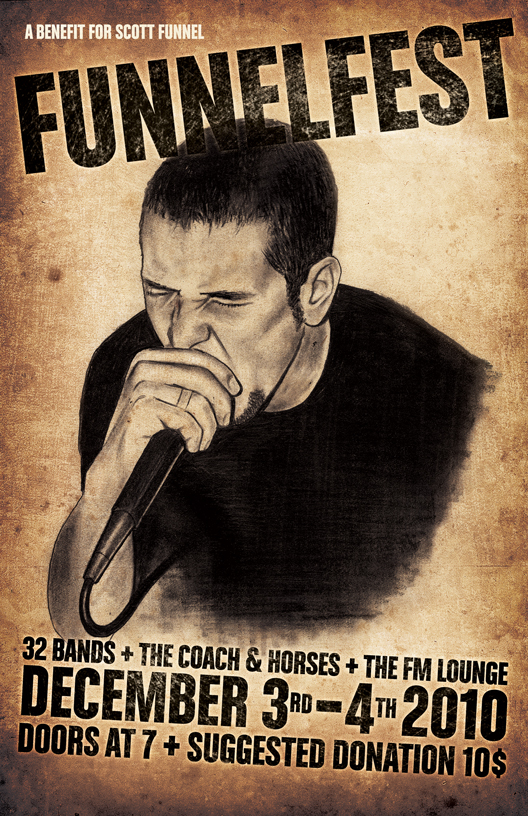 I’d like to preface this press release from Jamie Greer with a short thought about Scott Funnel and about his support for the music community.

When news reached me, via Jamie Greer (a die-hard supporter and true friend of so many) that Scott was attacked, I reacted the same way many in Windsor’s music community did. I began to shake, and felt like I was going to be sick. Scott, as many know, works at The Coach and Horses, booking shows, performing, promoting, and caring for our sprawling music community. I don’t see him that often, but each time he comes to visit us at Phog, or on the street, or at other downtown haunts…the greeting is always a big smile and a firm handshake.

I’ve grown accustomed to his gravel-like voice shouting, “Tommy!” whenever I’m within earshot on the streets of downtown. Although I don’t get to his neck of the woods, it’s not lost on me that his Windsor music persona is gargantuan.

We, as promoters, can get lost in our own spaces, rarely leaving to see what’s going on elsewhere. Scotty bucks this trend harder than any other local promoter. He’s a guy we see in other venues, on various night, being a part of the larger community. He’s someone that “gets it”. His approach to the interconnectedness of the “Windsor scene” is admirable and wise. He’s a guy that I’ve always appreciated (far more than he likely knows) for his willingness/eagerness to venture out and experience all corners of this music community. I’ve always, somewhat, envied his ability to go anywhere and be received the same way in each place he visits.

It’s no surprise that many businesses, bands, promoters, and more have answered the call to come to his aid with this gigantic show to support in the form of FunnelFest 2.0.

Below are the details for this heartfelt attempt to rally around Scott in his time of need and provide some much needed money.

On Friday, December 3rd and Saturday, December 4th, the most unique collection of local Windsor bands and musicians are flocking to the infamous Coach & Horses and FM Lounge (formerly the Old Fish Market) to pay their respects to a man most call “friend” in his moment of need.

FUNNELFEST 2.0 is a two-day, 33-band musical festival that was put together in 24 hours following the tragic assault on Saturday, November 13th of Peter Stewart (better known to friends and the music community as Scott Funnel), which left the musician, promoter, bartender, friend, and son with massive head trauma that has resulted in two brain surgeries to combat the injuries he received during this vicious attack.

Each of the 33 bands have some sort of connection to Scott, either from a deep rooted friendship or via a sense of gratitude for what Scott has done for their own musical endeavours over the past two decades. They are all performing for free and all money collected at the door for each of these shows will be going into a fund to help Scott through his recovery. Being a bartender and independent musician, Scott has no medical coverage for any medications he may need in his recovery and he will be unable to return to his job during his rehabilitation. Many local businesses, such as Long & McQuade Music, Jam Space, Standard Printing and more have all come forward to volunteer equipment and services for the event as well, and local media such as CBC, A-Channel, CJAM 99.1 FM and The Rock 100.7 FM have also offered coverage and/or promotion of the event and it’s circumstances.

With a diversity of acts that range from acoustic singer-songwriter to alternative rock, from Canadiana roots to heavy metal, FunnelFest 2.0 is not only a testament to the creative mosaic that is Windsor’s independent music scene, but a spotlight that shows the size of a footprint that Scott Funnel has made in the hearts of Windsor’s music scene.

Doors are at 7pm for all shows. No Cover, but donations are encouraged.
19+ with ID