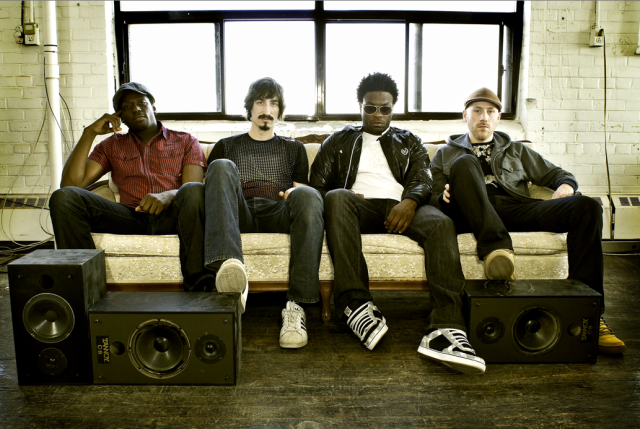 Phog Phest 2 had people riled up about a four-piece “rap n’ roll, dub n’ soul’ band from Toronto/Winnipeg. We were so thrilled to have them play the inside of Phog already, and we knew they’d transfer their dance-inducing energy to the stage outside. But alas, that was not meant to be. Complications sprung up, and Grand Analog was unable to make it to our 2010 celebration…

…which is why they’re coming to the 2011 party! There’s no doubt that they’ll expand the lore of their bangin’, beat-drowned-brilliance. Their live performances at Phog are move-inducing, house-party-esque romps as shown in the video below.

Knowing how many people had their hearts set on seeing Grand Analog last year makes it extra-special for us at Phog to have such a fun band performing in this line-up. In fact, the catalyst for asking Grand Analog to come this year was from a recent trip to Toronto, where a walk down Ossington, toward The Dakota Tavern found me (Tom) bumping into Warren (bass player of Grand Analog). I told him that I was hoping to get them back to Windsor soon, and, well…the rest is history.

We know that this band, by itself, is a reason to bring people out of their homes and neighbourhoods for a super-fantastic time at this year’s Phog Phest. Get your tickets now at Phog Lounge for $15!

“Grand Analog is a raw collective of seasoned record collectors, musicians and self described beat junkies…Grand Analog is unbalanced and dirty; never clean. Grand Analog is fuzzy with three coats of dust and reads like an old manual no longer in use”. Calligraffiti, the debut album, has an array of soundscapes you can travel through: ‘Touch Your Toes’ boasts James Brown style drums, rock guitar and a New Orleans style horn break. ‘Around This Town’ can only be described as a ska-pop-hiphop joint. The album titled “Metropolis Is Burning” keeps these traditions alive by fine tuning what is now the Grand Analog sound. Odario and DJ Ofield blame their father, a reggae DJ from the 80s, for cursing them with the love of music, bass and trouble. Catalist on keyboards was also born into a musical family inheriting a few dusty analog keys for the lab. Grand Analog’s live show adds soul to the bloodline mixing infrequent stage jams and off the wall tactics.”