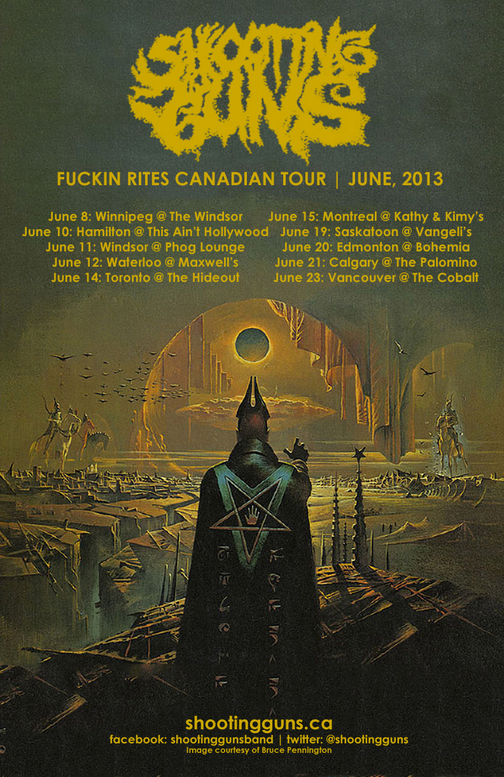 In ten years of booking Phog, I’ve never had the time or opportunity to cold-call bands from out of town to play our place. I’ve heard dozens, maybe hundreds, of bands that I’ve THOUGHT, “Wow, I’d love to host them.” But it always ends at the THOUGHT part of the process. I have never messaged a band or agent after hearing something I loved to get them to come to Phog.

Until about a few years ago when I was listening to CBC Radio 3 while likely doing this very thing…typing up a Phog Blog post. A genre of music that was fairly elusive to me came on, and while starting out slow it began growing and grinding…rhythmic and aggressive. Guttural. It was so conducive to the focus I needed to get the work done…no vocals…but more like something I would conjure to get fired up about my weekly basketball game.

I was so taken with the track that I found the band’s CBC Radio 3 page and listened to their 2 or 3 tracks over and over and over again. When looking for them online though, there was NOTHING. There was no contact for the band. Somehow, I tracked down a label email and told them something to the tune of, “I’ve never done this…but I really dig this band, and I NEED them to come to Phog if they ever tour. DO THEY TOUR?!”

The response I got was that they hadn’t toured yet, but if they did, they’d come to Windsor.

Three years and a Polaris Prize Long List nomination, they are coming to Phog! SHOOTING GUNS (Saskatoon) is playing NXNE in Toronto, and they needed a last minute show. I was absolutely beside myself, and happily scheduled them for the evening I work…which is Tuesday, June 11th. The first band I’ve ever asked to play here, out of the blue, cold-call, from out of town…happens this week.

Strangely, this is officially the loudest week of music Phog has ever booked. So many awesome loud acts play this weekend that I can’t even get one of them to play the Shooting Guns show (conflict of interest). Cellos, Worry, Toque, Life In Vacuum…all play on the weekend with out of town acts. So Shooting Guns will be the lone band playing Tuesday.

Be wise if you like loud music. Listen to them online, and then come see them. I’m going to be buying a lot of music on Tuesday…and I suspect you will be too.

Appropriately, here’s a song by Shooting guns titled Down and Out in Detroit: